And most observers believe that the market is no longer seller orientated in regard to pricing, and has instead moved to neutral.

Cap rates in the net lease market went on a long-term slide for several years as the economy recovered from the recession, with single tenant retail properties experiencing an especially steep drop. But the rates for all property types stabilized about 18 months ago, and signs now point to likely increases in the coming year. In a recent national survey conducted by The Boulder Group, a Northbrook, IL-based net lease firm, the vast majority of active net lease participants expect cap rates to rise in 2018. According to 39% of the respondents, rates will increase between 25 and 49 bps by the end of 2018, and another 22% say rates will go up by more than 50 bps. Just 9% think rates will move down. 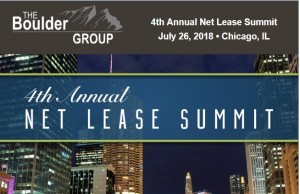 - The Boulder Group -
4th Annual Net Lease Summit July 26, 2018 • Chicago, IL. Randy Blankstein will be serving as Chairman and will be moderating the State of the Net Lease Market panel.