“We generated five qualified offers on behalf of the seller within three weeks of marketing the property,” said Lefko. “We procured a California-based 1031 exchange buyer that sold out of a multi-family property and was looking outside of California for a quality net-leased asset.”

According to Asher, this sale, which closed escrow within one percent of the listed price and a cap rate of 6.03 percent, represents the lowest cap rates for a Raising Cane’s in the Midwest above $5 million. In March 2018, Hanley Investment Group sold a new Raising Cane’s in La Habra, California representing the lowest cap rate of all time in the U.S.

Built in 2018 on 0.85 acres, Raising Cane’s is located at 13001 Round Lake Blvd NW in Coon Rapids, Minnesota, 12 miles north of Minneapolis and Saint Paul. The single-tenant corporate-guaranteed absolute triple-net lease investment has a new 15-year lease term with rental increases during the primary term. The lease also has four five-year options with 10 percent increases.

The property is situated at the signalized entrance to Riverdale Crossing shopping center, which includes anchors Walmart, Cub Foods and Hobby Lobby. The high traffic, signalized intersection of Round Lake Boulevard NW and Northdale Boulevard NW has a traffic count of 44,000 cars per day. The property is also situated adjacent to the U.S. Route 10/Minnesota State Highway 47 on/off ramps, benefitting from 73,000 cars per day.

“Coon Rapids is a dense, mature suburb of Minneapolis with over 154,000 people residing within five miles with household incomes exceeding $95,000,” said Lefko. “Coon Rapids is a perfect example of a market that attracts out of state net-lease investors. The city has an established retail customer base, but it also pulls from a greater trade area because of its strategic interstate location.”

Founded by Todd Graves in 1996 and named after his yellow Labrador, Raising Cane, the rapidly growing chain is renowned for its fresh, never-frozen chicken fingers, its secret-recipe Cane’s sauce, crinkle-cut fries, coleslaw, Texas toast, freshly-brewed sweet tea and fresh-squeezed lemonade. Raising Cane’s is continually recognized for its unique business model and customer satisfaction which is to have restaurants all over the world and be the brand for quality chicken finger meals, a great crew, cool culture, and active community involvement. Raising Cane’s has more than 370 restaurants in 24 states, Bahrain, Kuwait, Lebanon, Saudi Arabia and the United Arab Emirates with multiple new restaurants under construction.

About Hanley Investment Group
Hanley Investment Group Real Estate Advisors is a retail investment advisory firm with a $6 billion transaction track record nationwide, who works closely with individual investors, lending institutions, developers, and institutional property owners in every facet of the transaction to ensure that the highest value is achieved. For more information, visit www.hanleyinvestment.com. 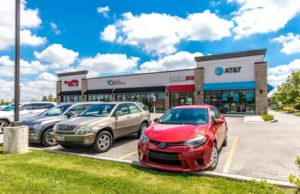