Located near the Lake Elsinore Diamond Stadium, the proposed retail development will bring a creative, commercial destination, which is expected to energize the adjacent area. Capitalizing on the craft brew craze, Artisan Alley will offer a variety of craft breweries as well as complementary non-traditional food offerings and retailers. Plans call for 95,000 square feet of retail/restaurant space and a 130-room hotel on 11 acres at the northeast corner of Diamond Drive and Malaga Road.

According to Civic Partners, Artisan Alley will be built in two phases, the first phase will consist of the construction of a 7,000-square-foot restaurant building, 21,500 square feet of brewery space, 11,200 square feet of retail, and a 6,700-square-foot pad building for a restaurant and/or shop space. Groundbreaking will commence in early 2017 with an estimated completion in 2018. 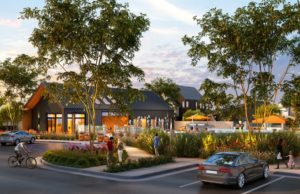