Completed in late 2016, the new 17,185-square-foot freestanding building with a drive-thru is situated on a 1.63-acre parcel of land at the southwest corner of Newport Road and Menifee Road in Menifee. Rite Aid has nearly 20 years remaining on the initial term with increases every 10 years.

“Currently, there are no competing drug stores in the immediate trade area,” said Fryman. “Rite Aid, the third-largest U.S. drug store chain, has been seeking the Federal Trade Commission approval of their merger with Walgreens since October 2015. To obtain approval, there have been plans to divest between 1,000 to 1,200 stores to Fred’s after they were denied in an earlier plan to divest 865 stores.”

According to a report in the New York Post on February 16, 2017, the companies may be close to winning Federal Trade Commission approval with a revised plan, possibly in the next two to four weeks, says Fryman. Combined, Walgreens/Rite Aid would have a reported 46% US market share.

“We commenced marketing during construction, and received multiple offers within a couple of weeks,” said Fryman. “We were also able to overcome the issues of rising interest rates during the purchase agreement negotiation and the breakdown of the Rite Aid/Walgreens merger during escrow. The buyer was hopeful that the merger would eventually go through. This transaction is a testimony to the demand for well-located single-tenant investments.”

Menifee is the second fastest growing city in Southwest Riverside County. Fryman reports that 115 percent population growth is expected within the next two years. The trade area has affluent demographics with $73,000 average household income within three miles of the property. The property also benefits from the 15,000+ students that attend Mount San Jacinto Community College one mile from Rite Aid property.

“We expect that investors will continue to seek out well-located single-tenant retail investments as the flight to quality increases, which strengthens the compression of cap rates, especially for assets like Rite Aid,” Fryman said. 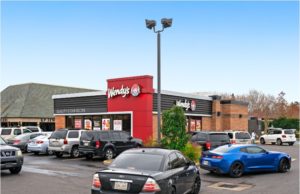