GRAND FORKS, N.D. – October 16, 2015 – (RealEstateRama) — At a “topping off” ceremony to set the highest beam for Robin Hall, Senator John Hoeven today emphasized the importance of the University of North Dakota’s new Aerospace and UAS Research, Training and Education Building. The senator said the new facility represents a commitment to the future and will strengthen North Dakota’s position as a national hub for research, development, testing, operation and commercialization in unmanned aerial technologies. The building is scheduled to be completed in May 2016.

“This morning we broke ground for a new building at Grand Sky, and this afternoon we mark a milestone toward the completion of Robin Hall,” Hoeven said. “Both of these projects represent a commitment to the future that has already attracted world-class companies like Northrop Grumman to cluster here in Grand Forks, truly making it a premier hub for UAS research, training and commercialization in the U.S. and globally.”

The 66,000-square-foot Robin Hall is being funded largely by private donations and is being built and managed by the Aerospace Foundation, the private-sector support arm of UND Aerospace. A major tenant of the building will be UND’s Center of Excellence for Unmanned Aircraft Systems, which in 2006 was one of the early beneficiaries of the state’s Centers of Excellence program launched by then Governor Hoeven. It was the first collegiate degree program of its kind in the nation and has emerged as one of the world’s premier programs for UAS training.

The senator has worked, both as governor and now as U.S. Senator, with the state’s UAS community for more than a decade to establish North Dakota’s leadership in UAS technologies and to grow UAS operations in the Grand Forks region. Through his various roles in the U.S. Senate, including as a member of Senate Appropriations Committee, Hoeven continues pursuing opportunities to support and expand the UAS community in North Dakota, including:

The senator is now leading the effort in the Senate to help build Grand Forks into the premier northern hub for UAS development in the nation. Hoeven introduced language to the FAA Reauthorization bill passed by Congress in 2012 directing the FAA to establish test sites across the country to integrate UAS into the National Airspace. Hoeven’s amendment instructed the FAA Administrator to consider factors including geographical and climatic diversity as well as the location of ground infrastructure in selecting the sites. In December 2013, Grand Forks was designated one of six national test sites.

In April, Hoeven introduced tthe Commercial UAS Modernization Act in April, legislation that sets interim operating guidelines for small commercial UAS while providing the FAA with the flexibility to make changes before it finalizes those rules.

Further, in May, the FAA selected the ASSURE team, led by the University of North Dakota and Mississippi State University, as the Center of Excellence for researching the safe integration of unmanned aerial systems (UAS) into the National Airspace. The Fiscal Year (FY) 2015 funding bill included $5 million to support the center, and the FY2016 Transportation Appropriations bill, approved by committee this June, includes an additional $5 million for the center. Hoeven will continue working through the Senate Appropriations Committee to secure future funds.

Hoeven also led the effort to help Grand Forks County secure an Enhanced Use Lease (EUL) with the U.S. Air Force for Grand Sky, a cutting-edge UAS technology and business park the county is building on approximately 217 acres at Grand Forks Air Force Base (GFAFB). The lease was approved and signed earlier this year. 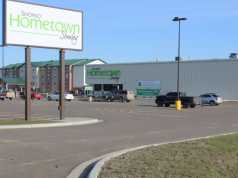