WASHINGTON, DC – July 5, 2011 – (RealEstateRama) — The Justice Department today announced the settlement of a lawsuit alleging that the owner and operators of a Monroe, Mich., mobile home park violated the Fair Housing Act by discriminating against families with children. The case was brought by the Justice Department’s Civil Rights Division and the U.S. Attorney’s Office for the Eastern District of Michigan.

“In today’s economy, it is more important than ever that working families with children have the fair access to housing guaranteed by law” said Thomas E. Perez, Assistant Attorney General for the Justice Department’s Civil Rights Division. “We are committed to the aggressive enforcement of our nation’s fair housing laws.”

“People who are struggling to find housing for their families should not have their choices limited by illegal advertisements and policies,” said Barbara L. McQuade, U.S. Attorney for the Eastern District of Michigan.

The lawsuit, filed today along with the settlement in the U.S. District Court for the Eastern District of Michigan in Detroit, alleged that Tel-Clinton Trailer Courts Inc. – the owner and operator of Shamrock Village Mobile Home Park in Monroe – engaged in a pattern or practice of violating the Fair Housing Act by maintaining policies that prevented families with more than one child from residing there. The lawsuit also named as defendants Eugene J. Ponzio, the president of Tel-Clinton, and Mildred E. Wampler, the resident manager at Shamrock Village.

Under the settlement agreement, which must still be approved by the U.S. District Court, the defendants will pay $27,500 in damages and civil penalties, including a fund for individuals who suffered damages as a result of the defendants’ conduct. The defendants will also develop and maintain non-discrimination policies at Shamrock Village and provide fair housing training to their employees.

The government’s lawsuit arose when a family contacted the Fair Housing Center of Southeastern Michigan, a private non-profit organization located in Ann Arbor, Mich., after Shamrock Village told them that they could not live there because they were expecting their second child. The Fair Housing Center conducted fair housing testing at Shamrock Village, which confirmed that the defendants discriminated against families with children. The family filed a separate lawsuit, which settled earlier this year.

The federal Fair Housing Act prohibits discrimination in housing on the basis of race, color, religion, sex, familial status, national origin and disability. More information about the Civil Rights Division and the laws it enforces is available at www.usdoj.gov/crt . Individuals who believe that they may have been victims of housing discrimination at Shamrock Village Mobile Home Park should call the Housing Discrimination Tip Line at 1-800-896-7743, mailbox number 9993, or the U.S. Attorney’s Office’s civil rights hotline at 313-226-9151 or email the Justice Department at

. Individuals who believe they may have been victims of housing discrimination may also contact Department of Housing and Urban Development at 1-800-669-9777. 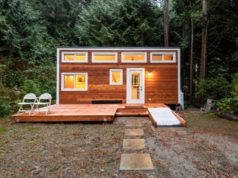