WASHINGTON, D.C. – February 2, 2015 – (RealEstateRama) — Single family housing experienced limited growth in 2014 over 2013 yet still reached the highest number since 2007 according to the Home Builders Association of Greater Kansas City’s (HBA) monthly Residential Building Permit Statistics report. The year ended with 4,220 single family permits compared to 4,090 in 2013. Including multi-family units, the total for 2014 was 8,130 compared to 6,969 in 2013 for an overall 17 percent increase. Looking at housing production over the past 35 years, single family permit activity stands at 66% of the average during that time period. The 3,910 multi-family units permitted during 2014 is 131% of the average over the past 35 years.

“According to a recent study by the National Association of Home Builders, the construction of these 4,090 homes added over $1 billion in income to the Kansas City area economy, generated $108 million in taxes and other revenue for local governments and provided over 17,000 jobs,” said HBA Executive Vice President Sara Corless. “We expect that impact to be even larger as housing experiences the 15 to 25% increase during 2015 forecasted by economists.”

Kansas City issued the most single family permits during 2014 with 841 in Jackson, Clay and Platte counties. Olathe at 505 single family units, Overland Park with 388, Lee’s Summit’s with 321 and Shawnee’s total of 203 rounded out the top five cities.

While Johnson County led area counties with 1586 permits in 2014, its overall share slipped from 41% to 38% among the eight counties of the region. Clay and Jackson counties both increased in percentage of the overall total with the remaining counties remaining unchanged or recording a slight decrease.

- MooveGuru -
MooveGuru, the leading provider of moving services delivered through real estate firms to consumers, is pleased to announce that Kathleen Kuhn will become the company's President, and the first female President in the company's history. 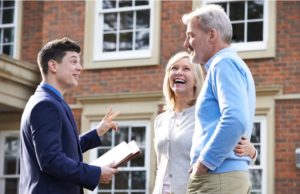 - RealEstateRama -
Whether it is buyers and sellers or someone who wants to become a part of the real estate industry, there is always a confusion regarding the terms used for the professionals in this field. You see the terms real estate agent and REALTOR

ONLY 14 STATES AND D.C. ADDED CONSTRUCTION JOBS SINCE PANDEMIC BEGAN...