“This acquisition is an example of how Meridian is leveraging its medical expertise to expand into new markets,” said Meridian’s Senior Vice President Mike Conn. “The iconic Grunow Memorial Medical Center gives us a solid value-add opportunity in the Phoenix market where we can improve the property, increase occupancy, and update second generation medical space for tenants that have specific needs.” Grunow Memorial Medical Center is located in the Coronado Historic District of Phoenix and was built in 1931, and designed by Arizona architect Lester A. Byron. “Grunow was one of the first clinics of its kind in Arizona where doctors could be located by a hospital,” Conn noted. “It also created the opportunity for patients to see their doctor in more of a residential setting rather than having to go downtown.”

The clinic was built in memory of Lois Anita Grunow, a seven-year-old who passed away from a ruptured appendix. The façade of the grand entrance, as well as the majority of its large windows, are adorned with intricate stone carvings that lend reference to symbols of the medical profession. These designs continue throughout the historic, two-story open lobby which contains various memorial plaques for doctors who have come and gone, as well as large hanging murals that portray major milestones in the history of medicine.

“The history of this building is truly incredible,” said Conn. “It’s considered one of the premiere Spanish Colonial Revival buildings in Arizona and, while the property itself has grown over the decades, the original structure, and its stunning façade, are still intact today.”

Conn added, “We’re excited to bring our creativity and client-focused out-patient ambulatory real estate strategy and solutions to Phoenix. Because Grunow Memorial Medical Center is considered a historical building, any improvements we make will be thoughtfully blended within the framework of the character and nature of the existing façade.”

According to Conn, Meridian’s priority is to re-tenant the property and update the building with ADA requirements. Meridian will also add new fire sprinklers to the building to accommodate additional uses that currently can’t occupy the building.

“Grunow is a great example of Meridian’s flexibility regarding the types of deals we are willing to acquire,” noted Ben Ivory, Acquisition Manager at Meridian. “Meridian is looking to acquire healthcare properties across the risk spectrum – from opportunistic value-add to core deals on or near healthcare campuses. We will close escrow with signed leases in hand that will significantly increase the occupancy and NOI of the building.”

Avison Young Principals Alexandra Loye and Julie A. Johnson, CCIM from the firm’s Phoenix office, represented both Meridian and PacVentures in the transaction.

About Meridian
A division of Marcus & Millichap Company, San Ramon, California-based Meridian is a full-service real estate developer which has completed over one million square feet of innovative and integrated commercial office, and medical office, since its inception in 2000. Meridian’s services are broad in scope but meticulous in detail — from site evaluation and land acquisition to entitlement and planning to construction and management. For more information, see mpcca.com. 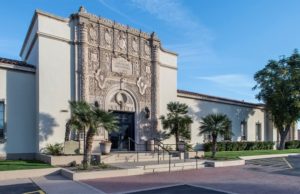 - Meridian -
Meridian, a full-service owner, operator, and investor of healthcare real estate, is pleased to announce that the company has closed escrow on the sale of Grunow Memorial Medical Center.