WASHINGTON – October 29, 2015 – (RealEstateRama) — U.S. Senators Johnny Isakson, R-Ga., and David Perdue, R-Ga., have cosponsored two resolutions of disapproval under the Congressional Review Act that would stop the Environmental Protection Agency (EPA) from implementing new energy regulations that could raise the cost of living for hardworking taxpayers and turn back the clock on America’s energy independence.

The first resolution of disapproval, S.J.Res.24, supported by Isakson and Perdue would stop the EPA from implementing their newest requirement that existing coal-fired power plants reduce their emissions by 32 percent by the year 2030. The second resolution of disapproval, S.J.Res.23, co-sponsored by the Georgia senators would prevent the plan from being imposed on new power sources in the future.

“Coal provides more than two-thirds of Georgia’s electricity and supports 8,800 jobs in our state,” said Isakson. “It was for instances such as this that the Republican-led Congress enacted the Congressional Review Act in 1996 under President Clinton, and it has served as an important backstop against executive branch overreach. I will continue to use the Congressional Review Act and all means necessary to fight against these attempted power grabs and job-killing policies by the Obama administration that raise the cost of living for hardworking Georgians.”

“President Obama has created a fourth arm of government, the regulators,” said Perdue. “When the Obama administration couldn’t pass cap-and-trade, they circumvented Congress and used unelected bureaucrats to implement their extreme agenda. These far-reaching regulations will cost Georgia jobs and drive up utility bills, causing a devastating ripple effect throughout our economy. Clearly, the Obama administration’s short-sighted energy policies continue to hurt the very people they claim to help, which is why we must continue to fight to bring some sanity to this overtly hostile regulatory climate. Instead of unfairly demonizing certain types of domestic energy production, President Obama should be working to responsibly utilize all of our God-given energy resources.”

The Senate is expected to vote this week on the resolutions of disapproval to stop these economically devastating EPA rules. If both resolutions are enacted into law, they would nullify both pillars of the costly power rule even if portions of the plan have already gone into effect.

The administration’s “Clean Power Plan” released on Aug. 3, 2015, requires an even greater reduction in emissions than the rule that was originally proposed in June 2014, and demands that states submit a plan to implement the rules by 2016. The new regulations are expected to impact hundreds of fossil-fuel plants, including 600 coal-powered plants.

Isakson and Perdue blasted the plan at the time, citing massive costs and no measurable reduction in emissions worldwide. They signed on as original co-sponsors of S.1324, the Affordable Reliable Electricity Now Act of 2015, which would delay the rule until legal proceedings from 26 states, including Georgia, have concluded, as well as give states the ability to opt out of the rule. Additionally, S.1324 would prevent the EPA from withholding federal highway funds if a state doesn’t submit a plan.

Isakson and Perdue also sent letters to President Obama and EPA Administrator Gina McCarthy during the proposal phase in opposition to the administration’s proposed Clean Power Plan and calling for the rule’s withdrawal. 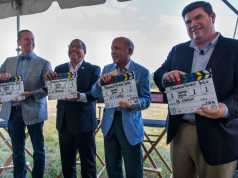 - RealEstateRama -
Getting a secured loan with your home equity can be nerve-wracking even for the most composed person. There are a lot of things to consider and the steps to get one may not be clear which leaves plenty of room for mistakes. Mistakes are the last thing you want to have when using your home as collateral for a loan so be sure to read on the following tips from our friends at Homebase Mortgages when getting a homeowner loan.