WASHINGTON, D.C. – February 5, 2013 – (RealEstateRama) — If home is where the heart is, then real estate savant Rob Thom son has left many hearts fulfilled. In 2012 alone, Thomson has sold $136 million in homes, putting dozens of families into their dream houses as well as selling beloved houses for strong market value. For Thomson, it’s not these numbers that get his gears going; instead, it’s the tender relationships he’s built over the years that make him one of the area’s most trusted real estate agents.

Practically born into this business – Thomson’s mother, Joan, founded top real estate group Waterfront Properties and Club Communities, where Thomson is now the managing partner – Thomson’s real estate background is vast and profound. Implementing Waterfront Properties’ state-of-the-art Internet marketing, sophisticated web presence and global reach, Thomson has been forefront in the real estate industry for decades, notably being asked to speak at national conferences and with other real estate compa nies about his innovations and modern marketing approaches. Thomson is a board member on the global brokerage network of Who’s Who in Luxury Real Estate and also a board member on the Board of Regents, two of the world’s largest international luxury brokerage networks.

Over the years, Thomson has built relationships with buyers, sellers, brokers and builders that have been long and withstanding. For them, Thomson is more their ally than anything else. They’ve credited Thomson’s determined work ethic, detailed business acumen, excellent negotiation skills and over all affable demeanor for consistently making him the top real estate agent with whom they work.

For homeowner David Bush, his historic Palm Pointe home was not even fully on the market before it was sold. Bush, who initially knew Thomson through the Realtor’s charitable work in the community, purchased this his toric waterfront home in 1998 with Thomson’s real estate guidance. And when it came time to sell it, Bush went back to Thomson.

“He’s the ultimate professional,” Bush says of Thomson. “He’s very easy to deal with, easy to work with. He has so many years in the business so he un derstands both sides of the equation. He wants both sides to be happy. And you can trust that when you ask a question, you’re going to get a straight-up honest answer.”

For Gray Ingram, whose Intracoastal home was only on the market for a handful of weeks before it was sold, he isn’t sure his home could have been sold so quickly had it not been for Thomson’s guidance and experience. “Rob came into my home and made a list for us to do to make it more ap pealing to buyers,” Ingram recalls. “For example, the house was on the water, but we had fancy drapes covering the water view. Rob came in and said it wasn’t a good idea to obstruct the water view, so we put up bright, airy drapes instead. It was that type of suggestion that I believe got the home sold so quickly. “At the end of the day, I think he and his agents understand what buyers are looking for, and they are able to speak with sellers to make it appealing to buyers.”

And for buyers, they also can find confidence in Thomson and his will to find them the best home for their needs. Sal Tiano, a managing director for J.P. Morgan Securities, and his family were contemplating whether or not they should move from Ballen Isles Country Club to the Intracoastal. After several years of vacillating, the couple decided last year was a good time to just look to see what was on the market. After finally finding a beauti ful eight-bedroom home with direct access to the Intracoastal, the Tiano family decided to make an offer. Several rounds of negotiation occurred with the owner, who wanted to modify the contract. But as Tiano puts it, Thomson and his associate Sheri Carter “made it happen.”

“I always felt like Rob and Sheri had our best interest in mind,” Tiano says. “Even before we found that home, I knew they were thinking about us. After getting to know me, he told me to stay away from a few homes that weren’t for me, homes that I now see would not have made my family happy.”

Builders also have found much benefit working with Thomson to get their newly built homes sold. Sebastian Smallegange, president of Turtle Beach Construction, has known Thomson for nearly two decades. First, Small egange’s father worked with Thomson, and when the younger Smallegange took over his father’s company, he continued working with Thomson. The builder has even gone so far as to consult with Thomson prior to building new homes to ensure the market will be receptive to certain home designs. He takes Thomson’s inputs and suggestions based on the Realtor having his finger on the pulse of the market, and then sits down with an architect to draft the home. “Rob’s probably sold over 50 to 60 of our homes, mainly in Admirals Cove,” Smallegange says. “If I want someone to sell my homes, I go to Rob. He knows my market, and he’s just got passion and power to get it done.”

As spec homebuilder John Adrica notes, he just “wanted a Realtor who un derstood the market and understood the ups and downs of home building.” When Andrica needed his new 10,000-square-foot Mediterranean spec home off the Loxahatchee River to be sold, he called Thomson. “It’s in his DNA,” An drica says. “He understands the plight of the builder, the home owner and the person who wants to buy. He takes a more professional, scientific approach to the marketing. He’s really embraced the Internet, giving the potential buyer all the information on the home. He spends time with his agents so they have the same insight and appreciation he does.”

And it’s not just clients and builders who find Thomson is no ordinary real es tate agent. Commercial real estate broker Rob Hamman has known Thomson for nearly 30 years. And through those years, Hamman, who works at Sperry Van Ness International Corporation, says he’s learned tremendous negotiation and client relation skills from Thomson. The two have built a symbiotic rela tionship with each other, with Thomson’s residential clients being referred to Hamman if they are looking for commercial properties. “Rob livens it up to make everyone more relaxed,” Hamman says of Thomson’s approach. “He gets the stuffiness off the table pretty quickly. He makes things enjoyable and can easily break the ice.”

Broker Kevin Spina of The Keyes Company has co-broked several deals with Thomson, including a $3.2 million home in a residential community last year. After seeing what Thomson does for his clients, Spina is convinced there is no other real estate agent like Thomson. He does things differently,” Spina says. “During one of the our deals, I went to his office and we called the client directly. I saw firsthand how he works with his clients. He’s got a good way of doing business, always making the clients feel comfortable and confident in their decisions.”

And, some of the best brokers have spawned from Thomson’s tree itself. Bill Gould – a broker with Exclusive Yacht Group, which handles the 12 loggerhead marinas in Florida – came down from Massachusetts to work with Thomson at Waterfront Properties as a kid fresh out of school. While at Waterfront Properties, Gould says the veteran real estate agent left a large imprint on Gould’s own career and gave him the necessary negotiation and creative mar keting skills to make him a success.

After making the decision to also work on yacht transactions, Gould kept in contact with Thomson. Gould, an active real estate broker, remembers a re cent printing snafu his company ran into in which he was literally about to send clients a major calendar mailing. His printers broke right at the deadline, and Gould said delaying the printing was not an option. So what did he do? He called Thomson to see if his sophisticated printing press could take the load instead. “I asked Rob for that huge favor, and he got everything in place within two hours,” Gould remembers.

“I don’t know another guy who would do that for someone who doesn’t even work in the same company anymore. He’s just a very considerate guy, some one who will go out of his way to help you out.” 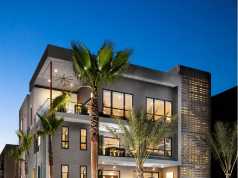