LITTLE ROCK – October 26, 2015 – (RealEstateRama) — Arkansas Attorney General Leslie Rutledge today announced that she has joined 23 other States in filing a lawsuit that challenges the Environmental Protection Agency’s (EPA) unlawful “Clean Power Plan,” which was published in the Federal Register today. In the documents filed with the Court of Appeals for the District of Columbia, the States make clear that the EPA has no legal authority to promulgate or enforce the section 111(d) rule.

“I have expressed my concerns over this rule since February, even testifying in front of a U.S. House of Representatives subcommittee, and urged the EPA to withdraw the rule,” said Attorney General Rutledge. “The EPA is going far beyond its legal authority under the Clean Air Act. This unlawful rule will have serious and significant consequences. In a State like Arkansas where over half of the electricity is responsibly generated from coal-fired power plants, the impact will be felt in the pocketbooks of Arkansas utility ratepayers. These increased costs will have a direct impact on the State’s ability to grow good-paying jobs with fair, reasonable electric rates. Like all Arkansans, I favor clean air. But I do not favor heavy-handed and unlawful regulations from Washington that will hurt Arkansans.”

States already have firm deadlines to submit initial and final compliance plans under the rule despite the 1,560-page rule not being formally published until today.

Rutledge and other States have been seeking a stay of the rule since it was announced.

Leslie Carol Rutledge is the 56th Attorney General of Arkansas. Elected on Nov. 4, 2014, she is the first woman and first Republican in Arkansas history to be elected to the office.

Rutledge, a native of Batesville, Arkansas, is a graduate of Southside High School, the University of Arkansas in Fayetteville and the University of Arkansas at Little Rock William H. Bowen School of Law. She began her legal career as Clerk for Arkansas Court of Appeals Judge Josephine Hart, now Associate Justice on the Arkansas Supreme Court. She was appointed Deputy Counsel for Arkansas Governor Mike Huckabee and later served as Legal Counsel on the Mike Huckabee for President Campaign. She served as a Deputy Prosecuting Attorney in Lonoke County and in subsequent service as Attorney for the State of Arkansas’s Division of Children and Family Services. She also served as Deputy Counsel at the National Republican Congressional Committee before joining the Republican National Committee as Counsel. Prior to her election as Attorney General, she founded and practiced law at The Rutledge Firm, PLLC. Rutledge lives in Little Rock 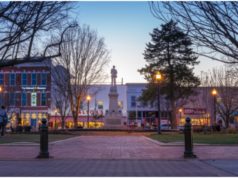 What to do and where to go in Bentonville Arkansas

- RealEstateRama -
Your kitchen is the most valuable space in the home. It is the heart of your home and often serves as the meeting place of the family. However, there are times when the kitchen often goes neglected, and you do not see the obvious signs of wear and tear. Here are some signs that your kitchen is ready for the big upgrade.